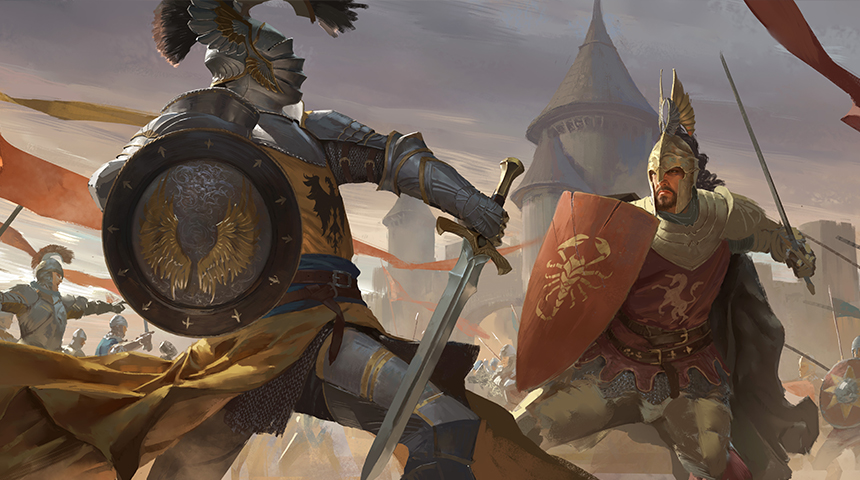 So, there I was, surrounded by goblins on one side, and snarling blood riders on the other. All of my men were dead, laid out all around me. Then this big brute of a troll came forward. Mind you, he wasn't much taller than me, but he had these fangs, sharp as knives, and I could smell his breath before I could see him. So he gets closer, and I’m trying not to puke from the foul stench coming from him, and then he stops. Just stands there looking at me with a slight grin on his face. Well, I try my best to grin right back, but he leans in even closer and gives me this smile that's all yellow teeth and the smell of swamp water, and I just couldn’t take it, I couldn’t hold back. I brought my hand up to my mouth to cover it, but it was too late, I spewed all over that ugly trolls face.

“Father! You didn’t! Did you? Really?” my little girl was laughing out loud imagining the troll’s reaction to being vomited on. “I most certainly did, and he didn’t like it one bit.” I said with a chuckle. “What happened next father?” she asked persistently.

“Well, let’s see, he wasn’t smiling anymore as he pulled back and wiped his face off, while I struggled to keep from laughing. ‘You’re going to die human, and when I finish eating you, I’m going to vomit all of you out onto the mud,’ the troll said with a chuckle. ‘Well, that’s rather wasteful,’ I replied. I looked around at the group surrounding me, but couldn’t see who had my axe. I couldn’t believe they’d taken my axe. If I was going to get…”

I trailed off as my daughter squealed in excitement. “You mean that axe, father?” as she pointed to the huge double bladed battle axe that hung above the mantle. “That’s the very same one my dear, isn’t she lovely? Now, where was I?”

“Oh yes, so, I was discreetly looking for my axe, but I couldn’t see it. Luckily, I still had my dagger hidden in my sleeve under my armor. The troll approached me again bringing his huge roughly hewn wooden hammer up and onto his shoulder. ‘Time to tenderize our dinner, then we’re gonna gut you and roast you over the fire along with the rest of your men,’ the troll sneered as he took a step closer and raised the hammer over his head with both hands. Flicking my wrist, I felt the blade slide down into my palm and then brought it straight up into the jaw of the troll, impaling him on the longer than average blade.”

“Why was the dagger so long?” my daughter asked. “What can I say, my dear? I’ve got big hands! Hahahaha!” I replied laughing out loud. She held her palms up against mine and they dwarfed her small, dainty hands. We both laughed together at this. I then leaned in closer to her, my eyes wide, mimicking the surprise on the trolls face.

“The troll then froze in shock, spending his last few moments confused about what just happened. Then his massive hammer slowly slipped from his grip and fell behind him, right onto the head of a draug. Yelping and gnashing his teeth, the draug ended up biting one of the blood riders on the leg and the circle of monsters began to break into chaos. Seeing my chance, I whirled around, with only a precious few seconds to find my axe. I saw a short, pudgy goblin holding it, admiring the fine craftsmanship and shiny jewels inset into it. I couldn’t blame him, if I was him, I probably would’ve done the same. I gave him a punch to the face that nearly caved in his head, then grabbed my axe back. By this time, they had all regained some composure and we’re turning their attention back to me. I held my axe tight and gritted my teeth, none of them would take it from me again. They were all baring their teeth and growling, or hissing, or clicking their fangs, it was a symphony of evil, angry sounds. I planted my feet firmly, and then they rushed me, I blocked and parried, using the axe more as a shield than a weapon because I didn’t have room to swing it. Soon they were on top of me, beside me, there were blades, hands, claws, and teeth all over me, yanking and pulling me down to the ground. Thankfully my armor was keeping them from doing much damage yet, but I was slowly being dragged down to what was certainly going to be a gruesome death. Falling to one knee I mustered all my strength, bursting up and throwing them off me, goblins and trolls and draugs being thrown this way and that. With my arms already raised, I swung my axe around me in a vicious circle, lopping off a few limbs and heads in the process as the others fell back. I stood there, breathing hard and holding my fearsome blade…” I trailed off once more as I noticed my daughter’s eyes were closed and she was resting peacefully. Probably dreaming of beautiful battle axes and dead goblins. The fire crackled as I sat silently for a moment, my eyes focused on the flames, but as I stared, they drifted up to my beloved axe on the wall. I grinned a little as the jewels shined in the firelight and whispered to it, ‘Rest easy baby, we’ll be making more memories soon’. With that I scooped her up and carried her to bed, while my daughter slept soundly in my chair.